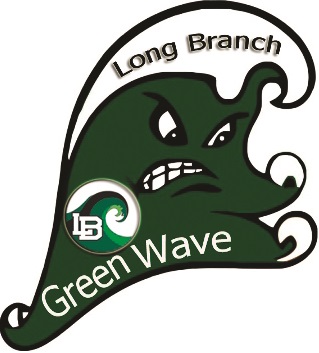 4/1: A-NORTH
Long Branch  39  -  Midd North  24  (BOX SCORE)
LB: Munson, Conlon, Tutt, & Friedman win by pin
3/30: A-NORTH
Manalapan  46  -  Long Branch  24  (BOX SCORE)
LB: Conlon & Tutt win by pin
3/27: NON-DIVISION
Colts Neck  48  -  Long Branch  12  (BOX SCORE)
3/25: A-NORTH
Freehold Twp  39  -  Long Branch  31  (BOX SCORE)
LB: Conlon, Tutt, Friedman win by pin
3/23: A-NORTH
CBA  60  -  Long Branch  14  (BOX SCORE)
LB: Conklin majors; Friedman wins by dec.
3/20: A-NORTH
Marlboro  52  -  Long Branch  21  (BOX SCORE)
LB: Munson, Conklin win by pin
3/18: A-NORTH
Middletown South  57  -  Long Branch  13  (BOX SCORE)
LB: Friedman wins by major
3/16: A-NORTH
Howell  63  -  Long Branch  9  (BOX SCORE)
LB: Bonnano wins by dec.
2021 Long Branch Wrestling
Long Branch lost seven starters, including a pair of State Medalists, to graduation. As a result, this will be one of the younger lineups the Green Wave have had in quite some time.
The bulk of the experience LB has back lies in the stretch from 145-170. There's a trio of seniors in this group in Joseph Conlon, Jack Friedman, and Bobby Lawrence. Both Conlon and Friedman are 2-time District Medalists, and both won D23 Titles as sophomores in 2019. They're joined by juniors Angel Bonnano, a 3rd-place finisher at Districts last year, and Deiondre McCulers.
Senior Andrew Conklin is coming off a 19-win season in which he finished 2nd at Districts. He provides a veteran presence in what should be an otherwise very young group of upperweights, that will include sophomores Luke Tracey and Mark Godsil, with a few other newcomers looking to make an impact in the lineup. I sound like a broken record at this point, but as history has shown, head coach Danny George has been as good as anyone at developing upperweights. So don't sleep on him getting production out of his big guys this season.
The lowerweights look like they will consist of entirely underclassmen, but there are a pair of starters back in sophomores Ignacio Guzman and Dom DeMarzo.
The word is that this year may very well be long time head coach Danny George's last season. If so, it would bring an end to one of the all-time great runs in Shore Conference history. He has a few proven veterans, that should have big years, to work with, but it's an otherwise very young group. Keep in mind, the LB feeder program has consistently churned out great talent over the years, so while the team is young, and there may not be the big names we're accustomed to with Long Branch, this should still be a solid group that can't be underestimated.
Possible Lineup in 2021
Graduated in 2020

Any suggestions, questions, or feedback?